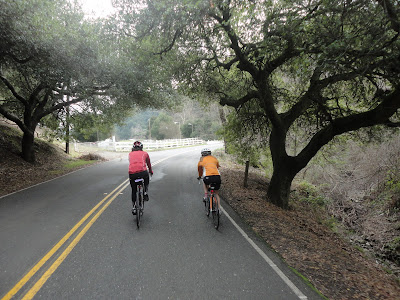 That is Soraya and Amy, and this is the view I have when I ride with them.  Yet, I continue to ride with them on a weekly basis, on very challenging rides.  One of these days, I just know it, I am going to get stronger!!  This particular day we rode 26 miles, 20 of which included Palomares up and over and back again.  And just for good suffering measure, we rode three miles into Castro Valley on some narrow, rolling road and back.  On the climb back over Palomares, we encountered this: 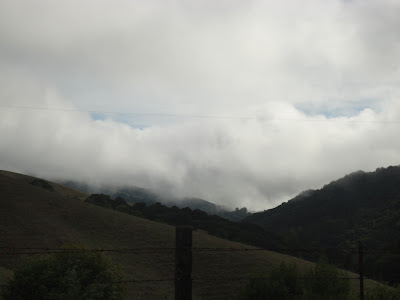 We had no choice, we had to get back to our cars.  It was a lot colder than when we left.  We survived, like we always do.

Our Cinderella training ride this week was 45 miles and included Palomares.  This is only the third training ride and I was a little concerned for my girls.  But I am quite proud to say, all 18 girls made it up just fine. We took it slow and chatted a lot of the way up the front, which is a 5-mile climb.  Ewa was one of the first ones up.  When I got up to the summit she was telling me what a "bitch of a hill" that was.  Please!

Going down the other side of Palomares is FUN, no doubt about it.  What we told the girls is, take note of how fast you get down the next 5 miles. Notice how steep it is.  The steepest part coming back up is at a 17% grade and you feel every single inch of that!  There was no chatting on the return trip.  Just a lot of slow pedaling and heavy breathing.  I pulled over half way up and gave encouragement to the ones that came by.  I waited a few minutes and finally made the final part of the climb myself.  I was greeted at the summit by everyone else that was already there and did the same for each and every girl that came up after me.  It was awesome!
One of the other ride leaders came up the hill quickly and said one of the riders was "stuck" about 1/4 mile down and needed some encouragement.  Leanne, Ewa, and I went down the 17% grade hill and found this girl off of her bike on the side of the road.  She was scared to start up again, on the steep hill, with her clip-in pedals.  With a little encouragement from the four of us, she was up and rolling again.  We rode beside her and talked to her as she pushed as hard as she could.  Three of us were a little bit ahead of her and reached the summit first.  I watched as the girl finally peaked the summit and you should have heard the roar or the group.  We were all yelling great things to her and clapping for her.  She came over to the group and a bunch of women gathered around her and hugged her.  She was so appreciative and emotional at that time.

That right there is what this training is all about!!!!  There was a bond made that day that will never be broken.

After that it was downhill for 5 miles and then off to our much deserved coffee stop.  I led the final 10 miles back to our cars after coffee and was very impressed with our entire group staying in a tight line.  Spirits were pretty high when our ride ended.  I felt like a proud momma! 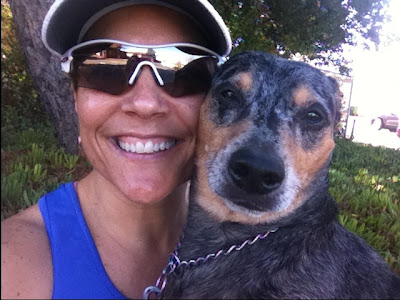 That hill was a bitch! It was, I tell you. And they tell me hills are my friends? Hmm...
But in full honesty, I had fun and strangely enough my legs did not kill me the next day.
I LOVE riding with the ladies. This is one amazing group.

Your pic with Boomer is good enough to frame.

Time to start open water practice? I know you can't wait for that ;-)

Great site! I'm trying to find an email address to contact you on to ask if you would please consider adding a link to my website. I'd really appreciate if you could email me back.

Thanks and have a great day!