I love stuff like this!  I can't resist when I see it floating around Blogger Land, I just have to participate.

What a weekend!  And I don't mean that in a good way.  Unfortunately.

I went to my 6:00 a.m. spin class Friday and suffered through it.  Do you ever have workouts when it's just more difficult than you know it should be?  This was one of those.  I came home and ate breakfast and felt like I was ready to go back to bed.  Instead, I took Boomer for a two-mile walk in the rain.  After that, I ended up falling asleep on the couch by 10:00 and taking a two hour nap.  I could not wake up all day.  I had to work at 5:30 and once I started getting ready for that I seemed okay.

Saturday morning was supposed to be a 50-mile bike ride with my Cinderella Challenge training group but I received an email at 9:30 p.m. Friday night saying it was canceled due to rain.  I woke up Saturday morning with a sore throat and headache.  I wasn't surprised by this considering Sara was sick two weeks ago, Keith was sick last week, and it's been going around at work.  At this moment, I was happy the bike ride was canceled.

Then something else happened and I was quite happy I wasn't out riding.  My 10 year old black/white cat, Xena (Warrior Princess) was showing some very strange symptoms that she wasn't doing very well.  We noticed a few months ago, she started walking flat footed on her front legs.  Then very rapidly, she was doing it on all four legs.  She has always been an indoor cat so we just figured she was not aging as well as my almost 20 year old black cat.

Well, Saturday morning she pooped in one of the bathrooms, which she has never done.  After that she kept going into corners, squatting and leaving little pools of light red colored urine.  Then she was hiding under the bed.  It scared me enough to call the vet and take her in immediately.

When we adopted her from the local shelter, she was a tiny baby and very, very sick.  I stayed up the entire first night we had her, praying she would live through the night. The next day she had to be hospitalized for three nights because she had pneumonia.  Shortly (like a week) after that, she fell off the kitchen counter and fractured her back leg!  She had to have screws put in and she was in a cast for six weeks.  So, as I held her Saturday morning I was very scared that this was the end for her and I was sad having to take her to the vet.

After talking to the doctor, he indicated she had symptoms of diabetes.  Suddenly a lot of other symptoms came to mind for Keith and I.  She had been drinking a lot more water and we had been going through litter like it was going out of style!  We were constantly needing more litter.  We left her at the vet so they could draw blood and urine.  I left feeling *much* better then when I got there.  I even took a photo (not shown here) of her, in case we were going to have to put her to sleep. 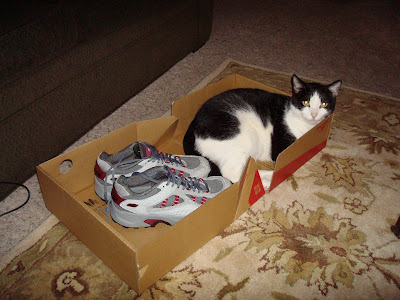 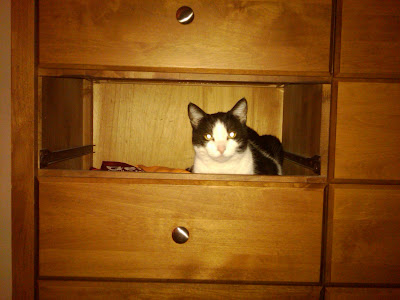 As soon as we got home I jumped on the Internet and read everything I could about Feline Diabetes.  It is more common than one would think.  After a long four hours, we heard from the vet.  Xena's blood sugar levels were 541.  It should be between 70-170.  Bottom line?  She has to receive insulin injections twice a day and her diet needs to be changed from dry food to a prescription wet food (or canned protein-rich food).  He showed me how to give the injection yesterday and this morning I did it all by myself.  It isn't that bad, considering.  The hardest part was taking her bowl of dry food away from her.  She's used to being free fed.  She pretty much tried to trip me every time I walked into the kitchen today.  In time she will adjust to it.  I am feeling very positive about Xena's treatment plan and happy her disease is treatable so we won't lose her at an early age.

I had a 20k trail run scheduled for today and sadly was too sick to participate.  Pretty much sucks!  No bike ride, no trail run.  What a waste of two days off, huh?  I've stayed in my pajamas ALL DAY, hoping the rest will do me good and I can get out and do something tomorrow.

*Last* Saturday I went on a 45-mile training ride with my fellow princesses in training.  We went across the Dumbarton Bridge and rode into Woodside, Portola Valley and Palo Alto.  The weather was perfect, in the mid-60's.  It was a beautiful ride with a couple of hard climbs. 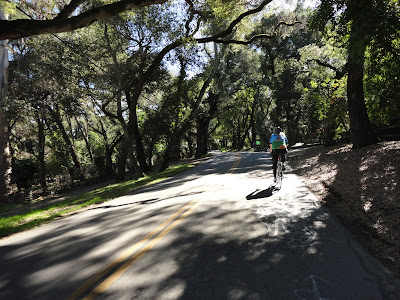 Sunday, Stacey came up and we went to Garin for an eight mile trail run.  I had to work a few hours so we didn't get started until after 2:00.  It was already ~70 degrees.  I planned a route that would take us into mostly covered single track trails for the majority of the run so we didn't overheat.  Considering I had just ridden the day before, I held up pretty well.  We had a marvelous time (as always) which makes the run that much easier. 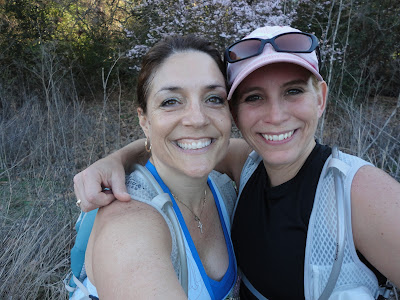 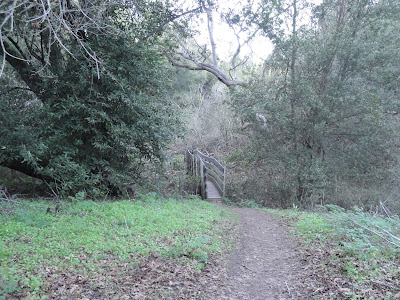 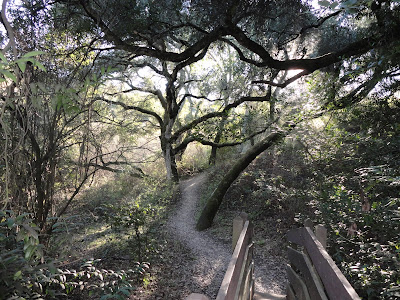 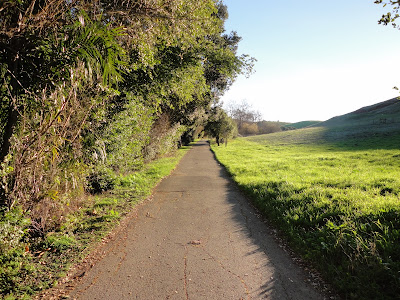 On our way back to my house, we saw a little dog on the side of Mission Boulevard.  We pulled over, Stacey said she had a leash in the car.  I jumped out and ran down the sidewalk toward the dog.  It was an old Jack Russell Terrier.  He was covered in fleas, grease and dirt.  His fur was missing on his back, by his tail and he could only see out of one eye.  He had a collar on but no tags.  Stacey put the leash over his head and we got him back to the car.  We drove through a neighborhood that was nearby, asking people out walking if they knew the dog.  No luck.  We took him to a Pet Food Express to get him cleaned up because Stacey figured she would just take him home and we could notify the local shelter when they opened up Tuesday morning.  Pet Food Express gave us free tokens for his bath and he was very cooperative while Stacey bathed him.  Afterwards they even gave us some treats and beef sticks for him.  We asked if they knew of any place we could get him checked for a microchip at this time on a Sunday night.  They suggested a place so we drove over to get him checked.  To our complete amazement, he was chipped!  The receptionist called the provider of the microchip (Avid?) and they were going to contact the owner and then call Stacey back.  We left the vet and came to my house.  After 30 minutes, we had still not heard from anyone.  Stacey called Avid directly and after a bit of a run around, she was finally able to talk to the child of the dog owner.  She got the address and drove the doggie home.  "Harley", the 12-year old pup was back home safe.  Another happy ending for a dog.  We love those, don't we? 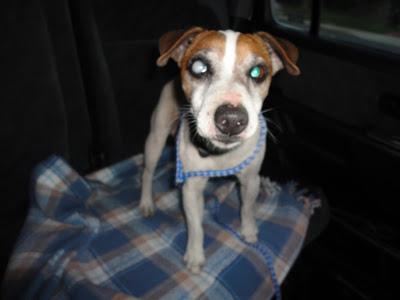 I worked a lot of hours this past week.  Well, 30 hours but that's a lot for me!  I went to a spin class Mon-Wed, with a BodyPump class thrown in there. On Thursday I went for a 35-mile ride with a guy from work.  We did the Niles Canyon, Palomares Canyon, Foothill loop with Happy Valley thrown in there.  For the first time ever, I was able to make it all the way up Palomares without a break.  There's one turn-out I *always* pull over to and pick up a lung catch my breath.  That my friends, is progress!

Yesterday I had another Cinderella training ride, a 45-miler.  We went out to Alum Rock Park and then headed up Mount Hamilton Road to Grant Park.  I have no idea how many miles we went up but I know it was at least half way.  It was a LONG climb at a very steady grade.  It was never too steep in any one spot and it was much easier than I had feared it was going to be.  I was quite relieved.

This morning Stacey made her way up for another trail run at Garin.  It was cool and foggy but we warmed up quickly as we climbed up one of the steepest trails in the park.  My legs were pretty darn sore from the ride yesterday, that's for sure.  We completed five miles but both agreed it felt like 10!  After a little lunch and some shopping, I crashed hard for a two hour nap.  Much deserved, I would say. 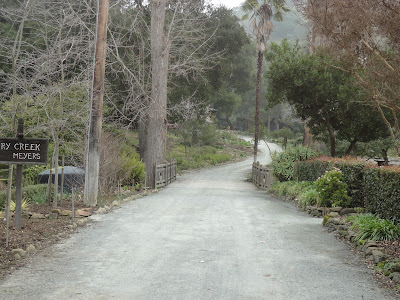 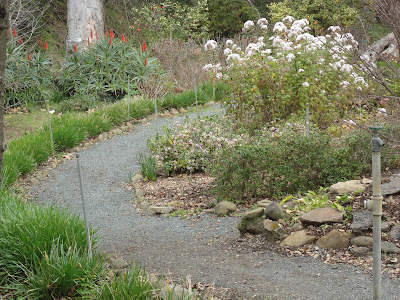 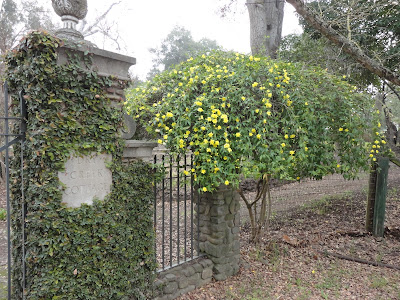 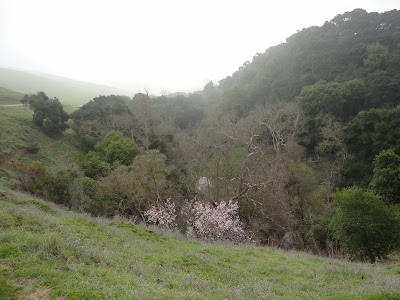 My thinking cap is on

I wasn't in the mood to talk last night but this morning on my walk, I had a lot of thoughts pop in my head.

1.  I *may* be addicted to exercise.  If I am, I can accept it because it's better than some other stuff I have been could be addicted to.

3.  I have the kindest, most considerate dog in the entire world!

4.  I lost three pounds last month.  I would like to lose five more.

6.  I'm putting my clipless pedals back on my bike today.  I have a 50-mile ride tomorrow with the Cinderella Challenge training group.  I want to be able to push and pull when I pedal.  Save my quads a little.

7.  I only have three pieces of candy left in my pound box of See's.  I only have one coupon for a pound left.  Valentine's Day is still 10 days away.  Gulp!

8.  I'm probably addicted to chocolate too.

9.  Sara's wedding is four months from today.  FOUR months!  I can't believe it.  It will be here so fast.

Before February ends as quickly as January did, I decided to total up my activities for January.

I walked 26.7 miles
I ran 35.8 miles
Ellen and I are getting reacquainted and rode 82 miles together
I went to 25 classes at the gym
I went on one 3 mile hike
I spent 2 days on the slopes

I met HSE Lori for a "run" Tuesday afternoon.  It was (I'm sorry to everyone else in the country) quite warm, my lower back was hurting and I was carrying a water bottle and two leashes.  We completed a very piss poor three miles but the best thing about it was the awesome conversation and laughs we always share.  Oh, and these two pictures. 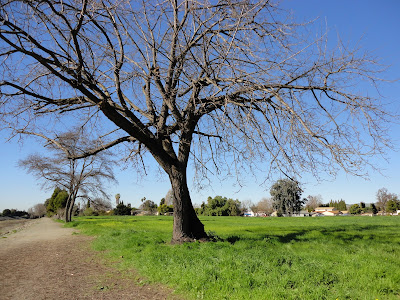 Today I took the doggies to Garin for a glorious little four mile run.  Other than the fact that the day was beautiful, I loved being out running on my favorite trails, there's not really a lot to say about the run so I will let you look at pictures instead. 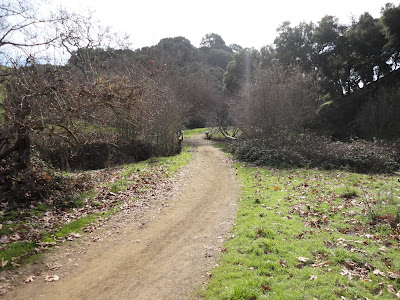 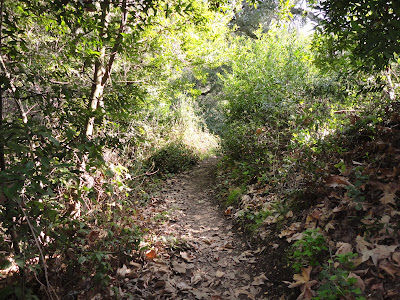 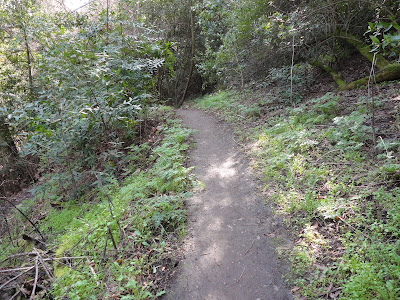 I guess I'm not really in a talkative mood tonight.  :-~