I was very happy to get two nice trail runs in this past week.  My beloved Garin is turning green (finally).  Look at this beautiful single track trail.  Aaaaah - heavenly! 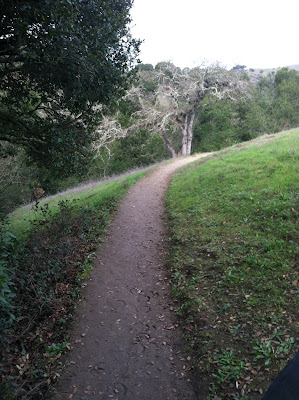 And Boomer was having a great time on the soft ground, shortly after one of the light rains we received. 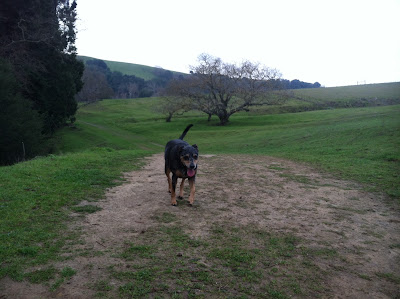 Last week's Cinderella training went remarkably well.  There were 11 of us on the ride and we completed 50 miles with a little over 1,200 feet of elevation gain.  There weren't a lot of hills but the ones we did have were pretty serious.  Each week the rides either get longer or have more climbing.  This coming Saturday we have less miles (45) BUT twice as much climbing (over 2,400 feet).

I've been starting some double workout days.  So far they consist of swimming in the morning and a spin class at night.  I've done this twice now and then throw in a "rest" day the next day.  Yesterday was one of those days.  I swam 2,850 yards in the morning, mostly 200's.  I used my buoy and I used my paddles.  I really worked on pulling a lot.  I love that feeling!  I am working up to (as I said before) 100 lengths without stopping.  A couple of weeks ago I was feeling good about completing 8.  Yesterday I could do 20!!!  That's 500 yards folks.  Little by little, I'm improving.

A very special someone GAVE me her full body wetsuit (she's upgrading).  She GAVE it to me.  I am so blessed to have such great friends in my life.  I don't know how I got so lucky.  Now I just need to get into the open water.  I was looking at doing a sprint triathlon (in the bay) at the end of this month.  I am just too scared of the open water.  I thought if I had a wetsuit it would be easier to think of getting in.  I'm still so scared.  I have two friends that are willing to take me out, it's just a matter of timing right now.

Does anyone have any advice or hints on how to get over the fear of open water? Please share with me, even if it's something small.

On the baby front (as of last Friday):  At 14 weeks, Sara is now in her second trimester.  Her baby can now squint, frown, grimace, and possibly suck his or her thumb!  Baby is 3-1/2 inches, about the size of a lemon.  Sara is actually starting to show a little bit.  :)