A year ago today

Then this, two days later


Do I feel blessed every day that I get to do what I am doing, without that horrible pain that was in my foot?

We had them for breakfast.  :)

Then it was off to tackle Mt. Diablo for 13.1 miles.  We were able to run the first 2 miles, because right at the 2 mile mark the trail becomes steeper and does not flatten out until the summit.  So, I took the opportunity to stop for a breather every chance I could take plenty of pictures to share. 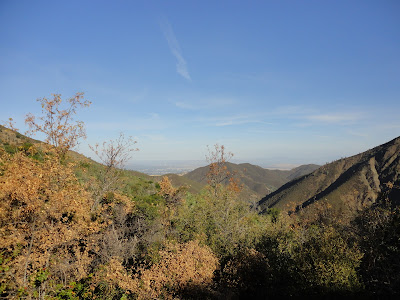 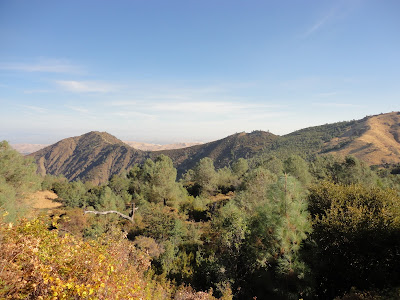 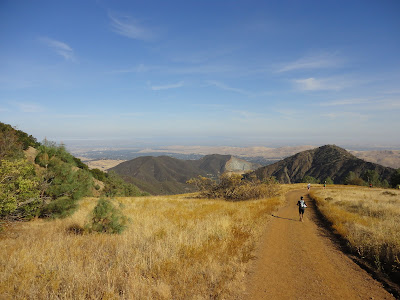 And I encouraged Theresa to perfect her high-side-kicking skills. 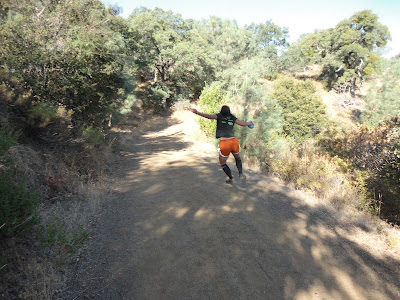 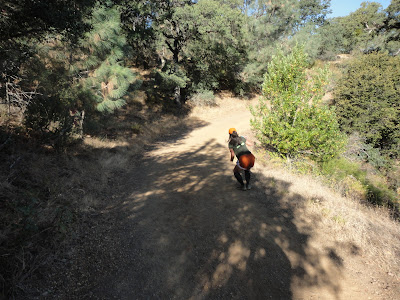 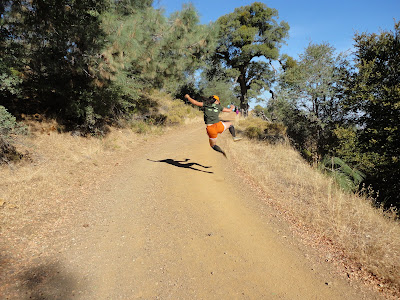 After the one and only aid station, the final climb to the summit begins and more beauty is seen. 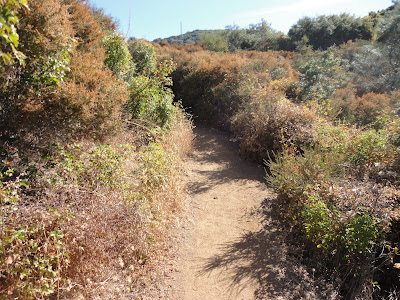 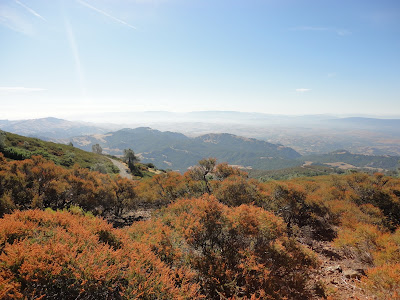 We made it to the top and were happy to know all we had to do now was run 6.65 miles down. 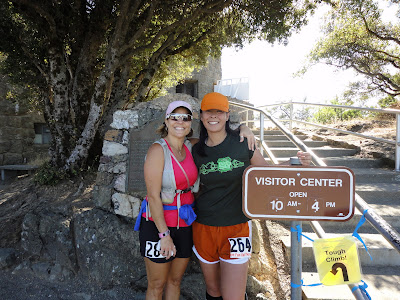 We were so happy in fact, Theresa was doing cartwheels in the parking lot! 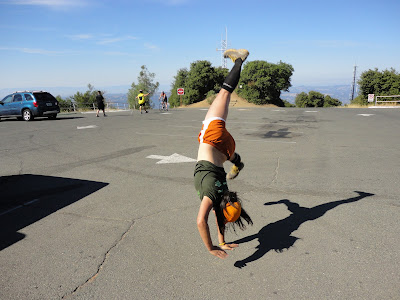 We were making great time running down.  My goal was to finish under 4 hours.  We were on a great pace to do that.  Suddenly, with 3.5-4 miles to go, the arthritis in my right knee made itself known.  I immediately had to slow down and within a very short time I was walking more than running.  It was kind of a bummer but at least I was able to walk.  I can definitely walk pretty fast.  But I wasn't fast enough to meet my 4 hour goal.  We crossed the finish line in 4:14.  Oh well.  That mountain always wins.  Every time!

After a little chit chat at the start/finish area, Theresa and I went into town and shared a pizza and caught up on our lives even more.

After a pretty good night's sleep, we woke up at 4:00 a.m. and immediately began breaking down our tents.  I had someone heat up some water for me so I could have a cup of coffee.  I don't often have to function without a cup of coffee and I figured today wasn't the day to give it a try.  Two packets of instant coffee in a cup and a little hot water.  It wasn't great but it did the trick.  I brushed my teeth and was ready to roll.  I actually slept in the clothes I wanted to hike in, to save precious time in the morning.  We were less than 1/2 a mile from the start but had to drive so our car would be ready for us when we made it back down the first mountain.

At exactly 4:38, the campground literally cleared out!

We got to the start with our headlamps on and I noticed how quiet it was.  I'm not sure if it's because it was so stinking early or if everyone was as scared as I was.  I was petrified!  I told my team mate I thought I was going to throw up. 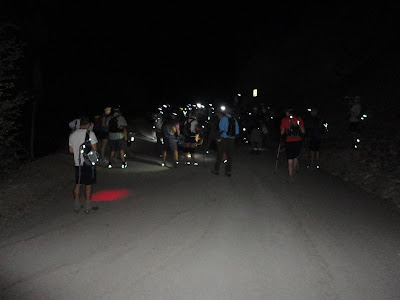 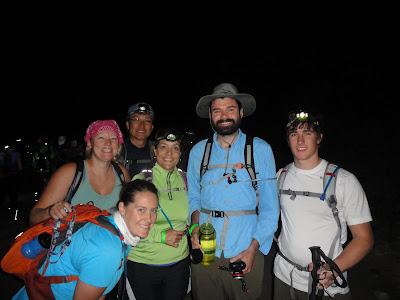 ﻿
5:00 comes and we're off!  We're not moving fast but we're moving quick for this early in the morning.  Did you read my previous post and that I thought this hike was going to be up a fire road for 5.5 miles and back?  I found out early this morning that we were cutting off the fire road, just less than a mile in and would be climbing up some single track.  While the single track was exciting to me, the climbing was a lot different than my hike the day before.

As we turned off to the single track trail I was trying hard to stay in the front part of my team.  I wanted to be in the first car to the second mountain so it would give me more time for the longer hike.  I got stuck behind a slow group and didn't ask to pass for about 10 minutes.  Nobody was talking.  Everybody was just breathing hard and trekking as best as they could.  When it flattened out a bit, I passed.  It was too late though.  I could not see the faster hikers from my team.  There were three of them.  I was alone now, there were three hikers from my team behind me somewhere.

The terrain was very rocky and a lot of loose gravel.  As I was hiking up, I knew it was not going to be easy to run down.  Part of my plan was to run down so I could make up some time that way.  The further up I went, the worse the trail got.

About 90 minutes into the hike, the sun started to come up and the views were spectacular.  I had to take some pictures. 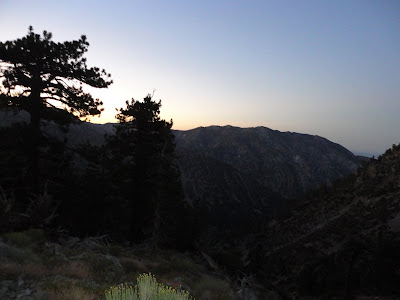 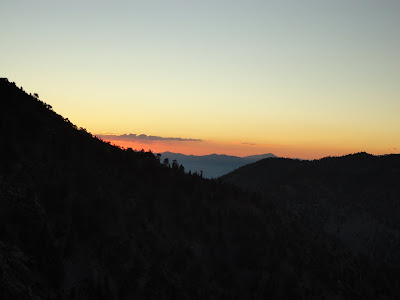 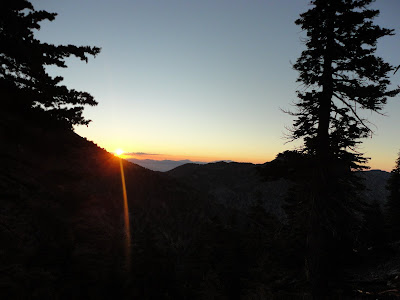 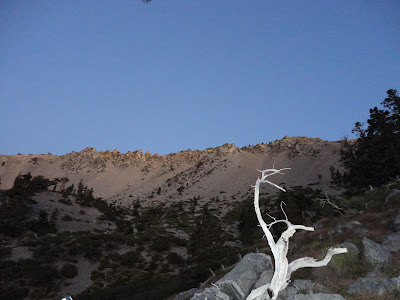 Kazu caught up with me and was cheering me along.  I was definitely moving much slower than I thought I would.  Since I passed those hikers earlier, there really wasn't any more flat sections.  My heart rate was staying between 146 and 150 but it FELT like it was about 180. I was having trouble breathing and my head began to pound.  Roughly a mile before the summit, I got tunnel vision.  I've never had that before and it was pretty scary for me.

Kazu and I made it to the top in 2.5 hours.  20 minutes after the first three hikers on our team.  I had no time to waste.  I grabbed a Clif bar out of my pack and ate it as I made my way down the mountain.  Kazu seemed to have no trouble bouncing around the rocks but I was not comfortable on my feet at all.  This was probably due to the fact that I rolled my ankle on Mission Peak the Saturday before this hike.  I was running down with Theresa and heard it pop as it rolled.  I was even on the fence about attempting this hike.  When I figured out I couldn't run down, I knew I might be in trouble.  I had a lot of miles to cover by 5:00 a.m. Friday morning. 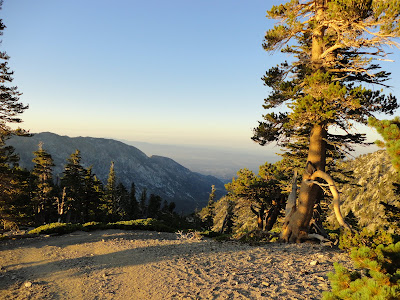 We took one wrong turn on the way down that led us down into some big rocks.  I had to climb out of it to get back onto the trail.  This just about killed me.  We lost time here and it completely took the wind out of my sails.  Once we got back to the fire road though, I was able to run the rest of the way down to the car and feel like I made up some good time there.

We were back to the car at 9:00.  FOUR hours after starting.  I was really hoping to be back before 8:30.  The first car was gone so Kazu and I hopped in his car and Haddie and Leanne were right behind us in Leanne's car.  I changed my socks and shoes and tried to eat something.  Nothing sounded good at all.  I had completely drained my 2 liter bladder on the first hike and I felt bloated.  I grabbed some mini powdered donuts and a few chocolate ones.  They tasted good at the time but a few minutes later, while Kazu was quickly trying to drive us to San Gorgonio through windy one-lane roads, I was starting to feel sick to my stomach.  Four separate times, I considered having him pull over so I could throw up.  I talked myself out of it.  Somehow.

The day before "The Challenge"

We all drove down to southern California late Tuesday afternoon.  Three cars, seven people.  We arrived at the campground at Mt. Baldy  just after midnight.

Needless to say, the night was uneventful.

I was able to sleep until 8:00 Wednesday morning.  Everybody got out their little backpacking stoves and started heating up water.  All I really cared about was my first cup of coffee.  I poured my instant coffee packets into my cup and waited for my water to boil.  Aaaah, boiling water to my rescue.  Someone brought a camp stove also and the others were making eggs, potatoes and bacon.  I brought a freeze-dried meal so once again waited moments for some boiling water.  I was slightly disappointed in this meal so I ended up eating some fruit and a few mini powdered donuts.  I was good to go.

I went ahead and changed into some light clothes and my trail running shoes.  Everyone looked at me like I was crazy and asked what I was doing.  I was dying to check out the trails and see what Mt. Baldy had to offer.  So off I went.

I walked up the fire road for close to 2.5 hours.  This is some of what I saw. 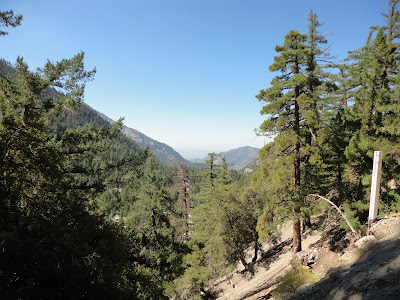 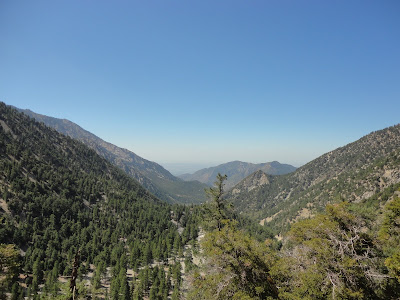 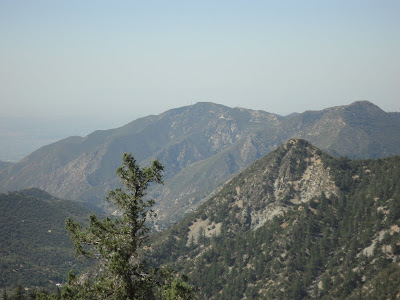 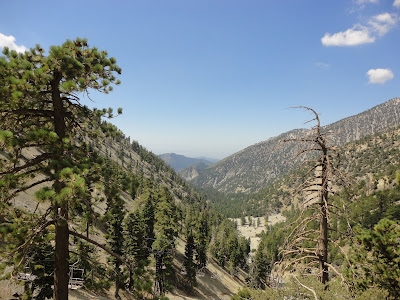 I had no idea the route for the challenge didn't stay on the fire road.  In my mind I was thinking this was going to be a piece of cake tomorrow morning - 5.5 miles up and 5.5 mile down.  You will soon find out how wrong I was!

On the way down, probably dropping 1,000 vertical feet per hour, the temperature was rising again.  There was a waterfall off the beaten path but I found a little trail that took me over to it and what a treat that was.  I stood at the bottom of the fall and let the water splash my legs.  It was just beautiful. 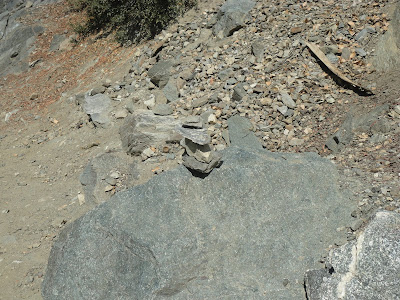 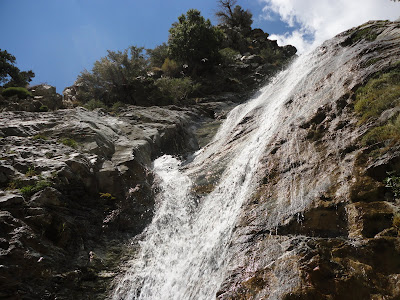 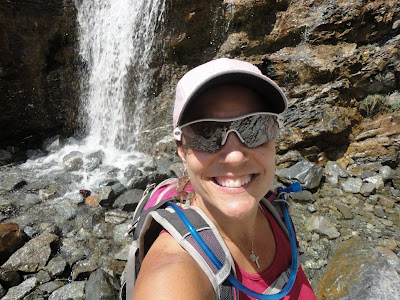 I got back to the campsite early afternoon and we decided to drive to Rancho Cucamonga to visit the REI store there.  It was close to 100 degrees by this time and I knew the air conditioning would feel amazing.  After visiting REI, a small group of us went to the Bass Pro Shop (for some more air conditioning time).  By the time we were done walking around there, it was time to head back to the lodge for our spaghetti dinner and registration.

Jansport puts this event together for employees of the outdoor industry to participate in.  FREE OF CHARGE to us.  They want you to raise funds for Big City Mountaineers but there is no requirement to do so.  They have donations from vendors for a silent auction which brings in money as well.  I will explain more about that when I recap the actual event and awards ceremony.  The dinner was very good and there was plenty of food to fill up on.  After dinner they had a slide presentation of last year's event and filled us in on what to expect.  By 7:30, we were ready to drive back to camp and get our bags ready for the next day.  I was in my sleeping bag by 9:30 and anxious for my 4:00 a.m. wake up call Thursday morning.

My next post will be all about the event itself and contain some beautiful pictures of the very long day.